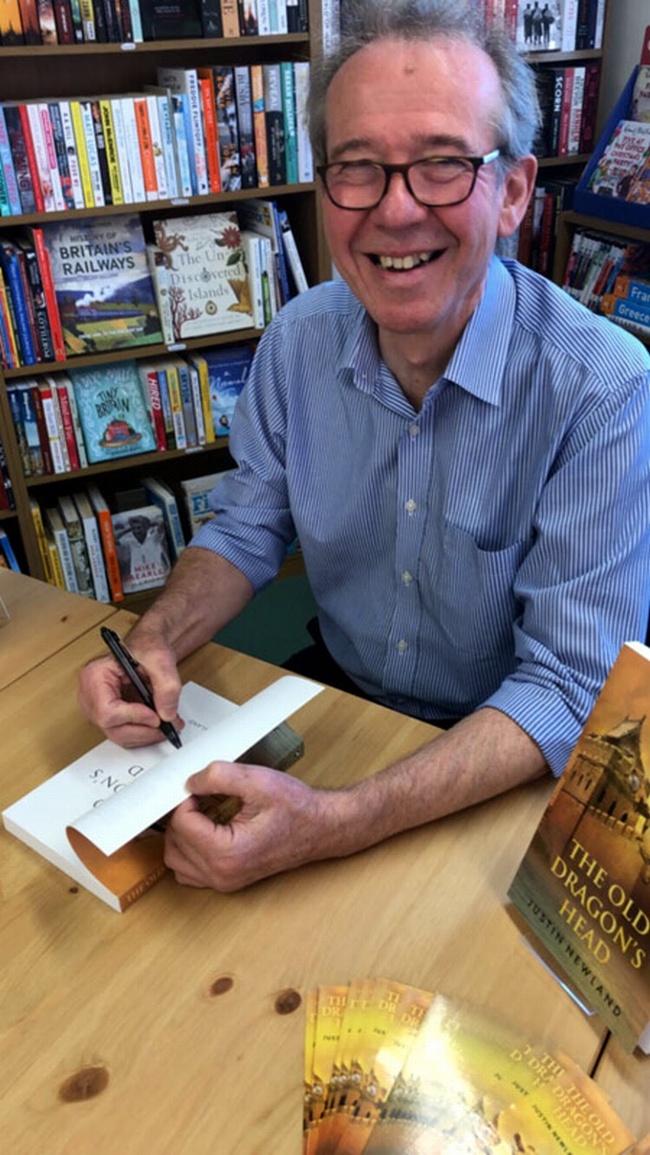 Tell us a little about yourself.
I was born during the last embers of 1953. I was awarded a Ph.D. in Maths from Imperial College, London, England in 1981 and I live with my partner in plain sight of the Mendip Hills, South West England.

In which genre do you write?
I write historical fantasy thrillers; in particular, secret histories in which historical events and people are guided and motivated by supernatural and numinous forces.

Why do you write about history? Why interests you about it?
We live today, all of us. By the act of breathing, are we summoned to living. In so doing, we inherit all that has gone before us. It's almost as if history doesn't just die after it's happened, but somehow takes on a life of its own.

Otherwise, why are there notions such as 'History repeats itself', where people, nations, and organisations continue to make the same mistakes as their predecessors? Why do people still worship and seek guidance from their ancestors, if they did not exist somewhere in the corridors of history?

All this to say that while yesterday may be written, tomorrow is not. Our task, as the generation who have inherited the Earth, is to sift through and separate out the fine from the course of history, in order that the next generation can inherit a better tomorrow. That's why I am fascinated by history and continue to write about it.

What is the most enjoyable thing you've found through writing?
Meeting interesting and helpful people – this is most definitely an unexpected, but added bonus of being a writer. Through marketing and promotion of my work, I've met all sorts of people, each with a story to tell - people I would never have met were it not for writing.

Tell us about one of your favourite pieces of music.
Ah, music is the food of the soul. Imagine a world without a conduit through which can travel uplifting emotions, rousing engenderment, or sober melancholy. Then imagine that the gods opened the portal of perception that allowed us to visualise the realm of music. And it was there, and we could develop it, and refine it from the simple flute to the sophisticated piano, from the single drum to the timpani.
So, yes, of course music. There are so many wonderful pieces to enjoy, to suit all moods, and emotions. Dances, divertimentos, and discos. Beethoven, Mozart and Handel. These were the men who worshipped at the altar of music.

I suppose I would choose the Ninth Symphony as Beethoven's best piece of music, and possibly the best piece of music ever written. Like Shakespeare's plays, it is transcendent, and speak equally to all men and women from all times and all generations. When we stand before the Great Pyramid at Giza, and cast our eyes at the Sphinx, do we not all have the same sense of awe and wonder? That's because great art affects everyone in the same way.

Tell us about one of your favourite movies.
The Bridge over the River Kwai directed by David Lean. Alec Guinness won an Oscar for the portrayal of the lead character, Lieutenant Colonel Nicholson.

I love the moral ambiguity of the Colonel's actions: at one level, he is disciplining his troops, and following good British Army policy, on another, larger level, he's actually thwarting the war effort of his own side. He is not unique; he is one of us, and to my mind, his character reveals the moral dilemma of the human condition. At one level, we are doing just fine, on another level....?

What books have you published?
My debut novel, The Genes of Isis (2018), is a tale of love, destruction, and ephemeral power set under the skies of Ancient Egypt. It is a secret history of the origins of the human race, Homo Sapiens Sapiens.

The Old Dragon's Head (2018) is my second novel. It's set in Old China during the Ming Dynasty against the background of a bitter war of succession for the Emperor's throne and it narrates the secret history of the supernatural forces that shaped the modern world.

My third novel is The Coronation (2019). Set in Prussia in 1761 while the country is at war with the Empires of Russia and Austria. As the Russian army occupies East Prussia, King Frederick the Great and his men fight hard to win back their homeland.

The latest novel is The Abdication (2021). In the ruins of Topeth, Tula, a young woman, confronts her faith in a higher purpose, and what it means to abdicate that faith.

Do you have a Work In Progress (a WIP)?
Yes, it's a secret history thriller again – this time set in England, my home country. Like my other novels, I wanted to set it at an important time, a time when there was a turning point in the nation's history. So, my WIP is set in the years from about 1570 and culminating in the repulse of the Spanish Armada in 1588. I mean, do you really think that it happened just like they said in the history books?

Where can they be bought?
Purchase from this web site for UK, Europe, the US, Canada, Australia, South Africa, India – there's world-wide distribution. They can be purchased from Waterstones, or any good local independent bookshop. They can also be purchased from any good online bookstore such as Wordery or Amazon. They are available as paperback or e-books.

Why buy your books from your website?
Purchase from this web site, and all paperbacks will be signed personally by the author, with a greeting message of your own choosing – and for no extra charge.