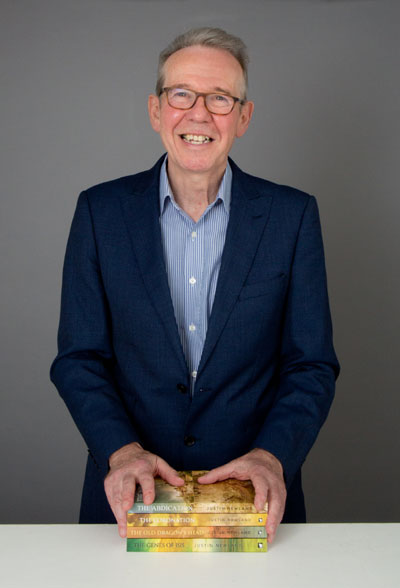 Justin Newland was born in Essex, England, three days before the end of 1953.

His love of literature began with swashbuckling sea stories, pirates and tales of adventure.

Undeterred by the award of a Doctorate in Mathematics from Imperial College, London, he worked in I.T. and later ran a hotel.

His taste in literature is eclectic: from literary fiction and fantasy, to science fiction, with a special mention for the magical realists and the existentialists. Along the way, he was wooed by the muses of history, both ancient and modern, and then got happily lost in the labyrinths of mythology, religion and philosophy.

Justin writes secret histories, in which real events and real historical personages are seen through a supernatural or numinous lens. His novels feature young protagonists and mature themes, and are an entertaining mix of mystery and history, spirituality and philosophy.

His debut novel, The Genes of Isis, is a tale of love, destruction, and ephemeral power set under the skies of Ancient Egypt, and which tells the secret history of the human race, Homo Sapiens Sapiens.

His second is The Old Dragon's Head, a historical fantasy and supernatural thriller set during the Ming Dynasty and played out in the shadows the Great Wall of China. It explores the secret history of the influences that shaped the beginnings of modern times.

Set during the Enlightenment, his third novel, The Coronation reveals the secret history of perhaps the single most important event of the modern world – The Industrial Revolution.

His latest novel, The Abdication, is a suspense thriller. In the ruins of Topeth, a young woman, Tula, confronts her faith in a higher purpose, and what it means to abdicate that faith.